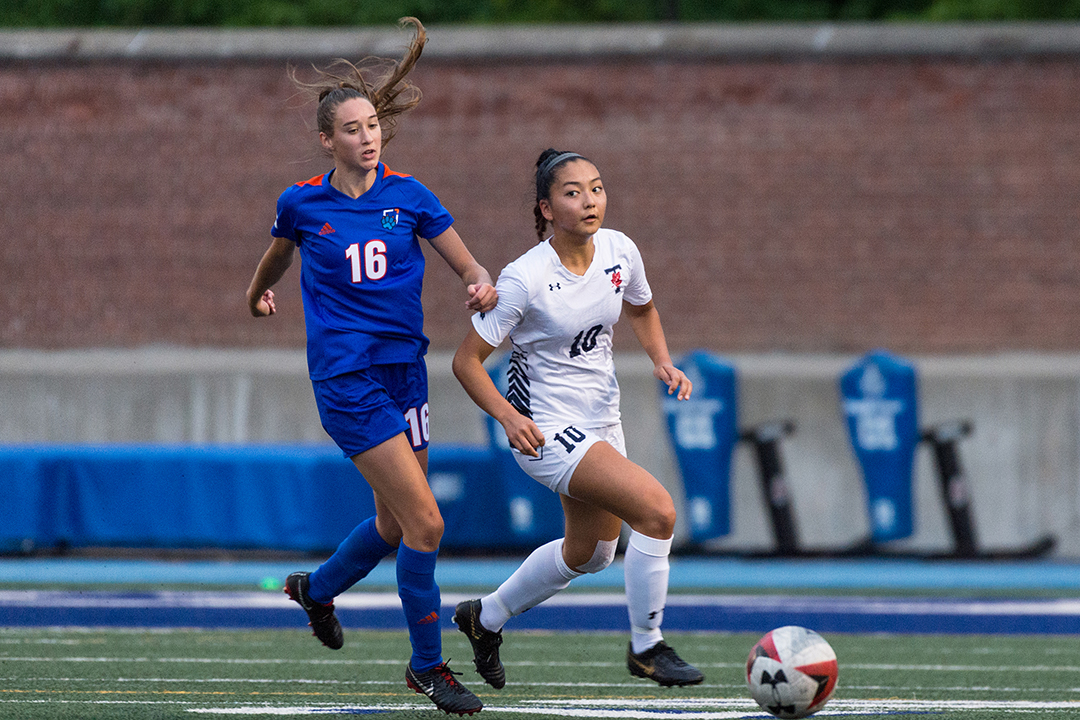 Nakajima wakes up early in the morning to allow for more recharge time at night. (Photo by: Seyran Mammadov/Varsity Blues)

How do you possibly balance the demands of an engineering degree while doing sports at U of T? On a windy yet pleasant Thursday afternoon, I sat down with my teammate, Rena Nakajima, to chat about it.

Growing up in Whistler, British Columbia, Nakajima has always had an inclination to be active. She grew up skiing, biking, and, of course, playing soccer. Her passion for the game started by playing with friends after school and grew from there.

Nakajima reflected on how interpersonal connections with her coaches and with other players growing up helped her: “I meshed really well with them, and I really enjoyed [soccer], not just as a sport for myself, but [also] as… personal development.”

The interpersonal skills developed through soccer have served Nakajima well both on and off the pitch. She is an impressive person because of her strong time management skills, which she credits to her commitments to the Varsity Blues women’s soccer team and her mechanical engineering major. She is specializing in mechatronics and energy systems and minoring in sustainable energy and business.

Nakajima was initially motivated to attend U of T for its engineering program but, since she knew some players on the soccer squad, she thought, “Maybe I could actually try out and take this on.” In order to stay on task and motivated, Nakajima keeps a schedule that she makes before every week, and she wakes up early in the morning to allow for more recharge time at night.

Her education has also allowed her to gain skills in working under tight time constraints. “Engineering has really been all about just learning how to juggle a lot in a short amount of time,” she explained. Those takeaways are, to Nakajima, more valuable than the technical information that the engineering program has to offer.

Nakajima also spoke about meeting like-minded people through academics and athletics. She found that her peers in engineering who are also varsity athletes tend to be highly organized and have a “perseverance factor and a desire to push [to] accomplish more than just school.”

These same qualities that Nakajima admires in her friends can certainly be found in herself. Miranda Badovinac, a fourth-year student who is a midfielder on my team, vouched for Nakajima in a written interview with The Varsity: “Rena is someone you can always count on. Whether it be on or off the field, the hard work she puts in and dedication she invests into everything she does is unparalleled. This, amongst many other reasons, is why the team looks up to her.”

When asked what she is most looking forward to post-pandemic, without hesitation, Nakajima chose practising. She was integral to the success of the women’s soccer team in fall 2019, in our exciting push to qualify for the national championship and in our bronze medal finish.

As a centre back, Nakajima defended for us well, playing heavy minutes into the playoffs and games at the national championship.

When asked about playing with Nakajima on defence, my teammate and third-year defender Alessia Cusimano wrote, “Getting to play alongside Rena last year (especially) at Nationals was huge. On and off the field, she’s worked super hard to get where she is. Trust is important for the defensive line, and Rena makes that feel effortless!”

While COVID-19 has tested the mental and physical strength of my team this year, Nakajima has continued to develop both on and off the pitch, and she’s looking forward to taking the next season by storm.

– This story was originally published on The Varsity on March 14, 2021 by Erin Kelly