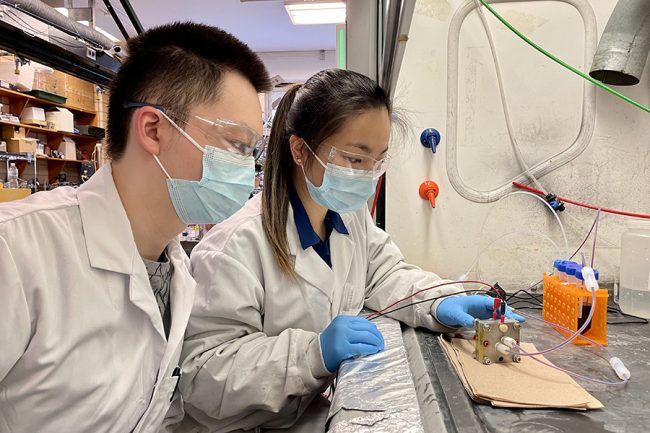 U of T Engineering researchers Shijie Liu (MIE MASc candidate, left) and Celine Xiao (MIE PhD candidate, right) work on their electrochemical system in the lab of Professor David Sinton (MIE). They are part of a team that just placed in the global top 60 for the XPRIZE Carbon Removal. (Photo: Rui Kai (Ray) Miao)

A team from U of T Engineering has placed among the Top 60 in the Milestone Round of the global XPRIZE Carbon Removal.

“It feels amazing,” says Celine Xiao (MIE PhD candidate), one of the members of Team E-quester. “We didn’t know what would happen because this round of the competition was open to everyone in the world, not just students. It’s a big honour.”

Last fall, Team E-quester was one of only 23 teams to earn a Student Award in an earlier phase of the competition. That honour came with US $250,000 in seed funding, which the team has used to further develop their prototype.

On February 1, they submitted their latest results to qualify for one of 15 Milestone Awards, which each carry a value of US $1 million and will be awarded on April 22. The Top 60 list, announced today, was created from nearly 500 submissions, and is the shortlist from which the Milestone Award winners will be selected.

A four-year competition, XPRIZE Carbon Removal is funded by Elon Musk and the Musk Foundation. It invites innovators and teams from anywhere on the planet to create and demonstrate solutions that can pull carbon dioxide directly from the atmosphere or oceans, and sequester it durably and sustainably.

They are advised by Professors David Sinton (MIE) and Ted Sargent (ECE), MIE research associate Christine Gabardo, and alumnus Alex Ip (ECE PhD 1T5). Many of these researchers are also involved in CERT Systems, a spin-off company that aims to commercialize the group’s unique technology.

Their goal is to lower the energy cost of a carbon capture technique known as Direct Air Capture, or DAC. This is an established method that begins when ordinary air is pumped through a strongly alkaline liquid solution. The CO2 in the air gets converted into a set of chemical compounds called carbonates, which remain dissolved in the liquid.

Today, the standard way to recover the dissolved carbon is to precipitate the carbonates as a solid salt, then convert them back into a gas using high temperatures generated by burning fossil fuels. But this method is both energetically expensive and produces its own carbon emissions, which undermines both the economic viability and the environmental benefit of the overall DAC process.

Team E-quester is using electrochemistry to provide an alternative pathway. In their system, a series of electrically-driven chemical reactions, powered by custom-designed electrocatalysts, converts the dissolved carbonates directly into CO2 gas, eliminating the precipitation and heating steps.

“In traditional DAC, for every tonne of CO2 you capture, you still end up emitting between 0.3 and 0.5 tonnes of CO2, most of which is due to the heating step,” says Liu.

“Based on the data we’ve gathered from our lab-scale prototype and the detailed technical analysis we carried out, we believe that our electrochemical process could get this down to 0.038 tonnes of CO2, a reduction of about 90%. In our best-case scenario, we also reduce the overall energy requirement by about 11%.”

Xiao says that the team has made several improvements to their system over the past few months.

“With our Student Award, we were able to purchase better materials for the catalyst and for other components, and to manufacture systems that were more tolerant of the strongly alkaline liquid we were working with,” she says. “We demonstrated stability for longer periods of time, in addition to lower energy requirements that lead to increased efficiency.”

“We are very proud of what the team has accomplished and excited about their prospects, both in this competition and the global challenge of drawing down atmospheric CO2,” says Sinton. “Go E-quester!”

The team is hoping that the progress they have achieved will put them in a good position to vie for the competition’s US $50 million Grand Prize, to be awarded in the fourth year of the competition.

“We know the competition is tough, but we definitely want to try our best to go for it,” she says. “Regardless of what happens, we know that DAC is important, and will have a place in our future efforts to get to carbon neutrality. That’s our goal for the future.”

– This story was originally published on the University of Toronto’s Faculty of Applied Science and Engineering News Site on April 19, 2022 by Tyler Irving