“These recipients illustrate the amazing depth and breadth of the contributions being made by U of T engineers, spanning research, management, entrepreneurship, professional leadership, and service to the profession and to the community,” said U of T Engineering Dean Christopher Yip. “On behalf of the Faculty, my warmest congratulations to these outstanding engineering faculty and alumni on this well-deserved recognition.” 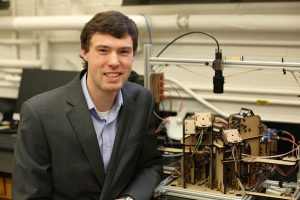 Eric Diller’s research is bringing magnetic wireless small-scale robots from untested concept to application. He has made significant advances in fundamental new capabilities for actuation and control of novel biomedical microdevices and has developed new devices such as miniaturized surgical tools and ‘smart pills’. Along with his academic, clinical and industry partners, he is rapidly progressing towards applying these advances to commercialization.

Diller’s advances in this area have been recognized with multiple awards, including the Ontario Early Researcher Award, the U of T Connaught Innovation Award, the Canadian Society for Mechanical Engineering’s I.W. Smith Award, and the IEEE Robotics and Automation Society’s Early Career Award. Diller has published 68 peer-reviewed publications in top journals such as Science Robotics, Nature Communications and Advanced Functional Materials, and his papers have been cited around 2700 times. His research has been nominated for six Best Paper Awards at engineering conferences. In addition to research articles, his work has resulted in six patent and provisional patent applications. Diller’s research is frequently featured in the press, including IEEE Spectrum, NBC News, Science News, and The Financial Times. A recent video of his work on the YouTube channel Veritasium has received more than 1.8 million views.

Read the full story by Carolyn Farrell and learn about all of the U of T Engineering winners on the University of Toronto’s Faculty of Applied Science and Engineering News Site.