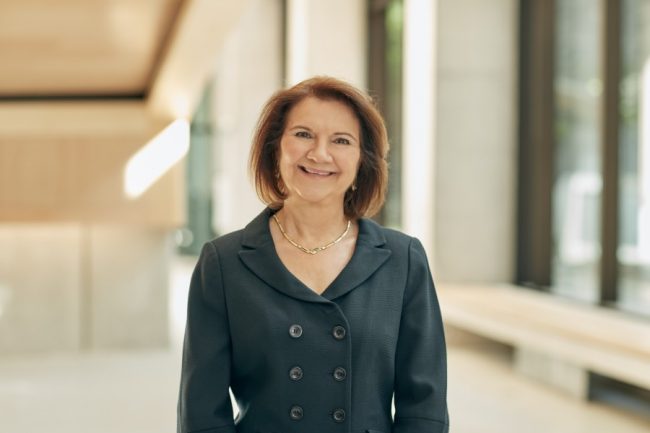 As Dean of U of T Engineering from 2006 to 2019, Professor Cristina Amon established the Faculty as a world leader in multidisciplinary engineering research and education while making incredible strides in advancing gender equity, diversity and inclusion. (Photo: Daniel Ehrenworth)

Professor Cristina Amon (MIE), Alumni Distinguished Professor in Bioengineering and Dean Emerita of U of T Engineering, has been named a Member of the Order of Canada, one of the country’s highest civilian honours. The new appointees were announced today by Governor General Julie Payette (ECE MASc 9T0).

A distinguished scholar in mechanical engineering, devoted educator, innovative academic leader and university administrator, Amon served as Dean of U of T Engineering from 2006 to 2019. During that time, she established the Faculty as a world leader in multidisciplinary engineering research and education while making incredible strides in advancing gender equity, diversity and inclusion.

“The Order of Canada recognizes those who devote themselves to enriching the fabric of this great country, and I am therefore tremendously proud to be honoured with this appointment,” said Amon. “My inclusion also acknowledges the vital role of excellence in research and education as the engine of Canada’s innovation economy, critical to the future prosperity of this country. I am enormously gratified that today we can stand proudly alongside world leaders on the global stage.”

Cristina Amon has served the engineering profession with distinction and dedication. She was the founding Chair of the Global Engineering Deans Council and Chair of the Research Committee for the National Council of Deans of Engineering and Applied Science, and has served in numerous leadership and committee roles both in Canada and abroad.

“It is impossible to overstate the contributions Cristina has made to enhancing the student experience, catalysing trans-disciplinary research collaboration, and strengthening the vibrant community in this Faculty,” said Chris Yip, Dean of U of T Engineering and the inaugural holder of the Decanal Chair in Innovation. “This Order of Canada acknowledges her lasting legacy of excellence at U of T Engineering, and her impact across the engineering profession.”

“Years ago, I made the choice to pursue my life’s work in Canada, a country that values and celebrates the diversity of cultures, backgrounds, abilities and perspectives of each one of its people,” said Amon. “It is deeply meaningful for me to receive this award in recognition of my own contributions to advancing that diversity and inclusion, and to creating new opportunities for generations yet to come.”

– This story was originally published on the University of Toronto’s Faculty of Applied Science and Engineering News Site on November 27, 2020 by Carolyn Farrell