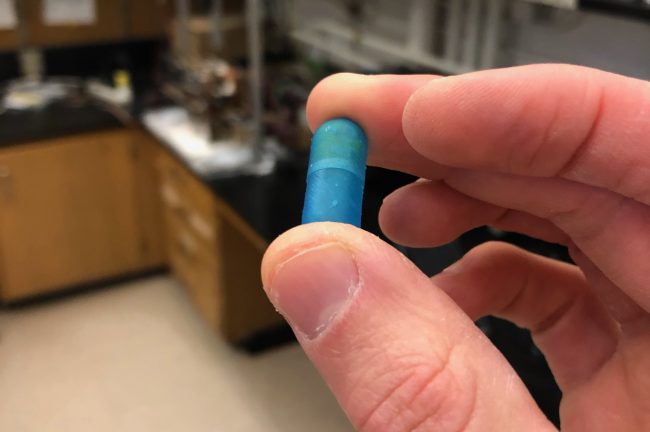 Professor Eric Diller (MIE) holds up a magnetic capsule that can be used to non-invasively sample the gut microbiome, thereby advancing research into a host of human health conditions. (Photo: Eric Diller)

It may make you squirm to think about it, but your insides are home to trillions of organisms from hundreds of different species. Scientists are studying this “gut microbiome” as a factor in a range of human health conditions, but current techniques could use some improvement.

“Gut microbes in humans are typically studied using stool samples, which inform about microbes in the colon,” says Professor Eric Diller (MIE). “While colonoscopy could allow for access deeper within the intestines, it is of course highly invasive. This means there is no simple, non-invasive method to sample within the small intestine, which is the most important area of the microbiome to study and observe.”

Diller and his team have a solution: a tiny magnetic capsule about the size of a vitamin pill. When swallowed by a patient, the capsule slowly works its way through the digestive system. When it gets to the desired point, it can be activated by holding a large magnet over the abdomen.

“The magnet opens a trap-door on the capsule, which then closes to tightly seal the sample inside,” says Diller. “The capsule can then be recovered from the stool and sent to a lab for analysis.”

Diller and his team will use the funding to create an even smaller capsule that is easier to swallow, as well as to develop a way to track the capsule and enable samples to be taken at a more precise location.

“Tracking will be done using a vest of magnetic field sensors worn by the patient, as well as with ultrasound,” he says. “Along with project co-investigator John Parkinson at SickKids, we have already developed a prototype which we tested in animals, and we found that we could indeed collect samples with our non-invasive method.”

If successful, the tool could be invaluable to researchers as they continue to study the role of gut microbiota in all kinds of health conditions, from irritable bowel syndrome — which affects 226,000 Canadians — to diabetes.

The other six projects funded by this year’s Connaught Innovation Awards are:

– This story was originally published on the University of Toronto’s Faculty of Applied Science and Engineering News Site on March 29, 2021 by Tyler Irving