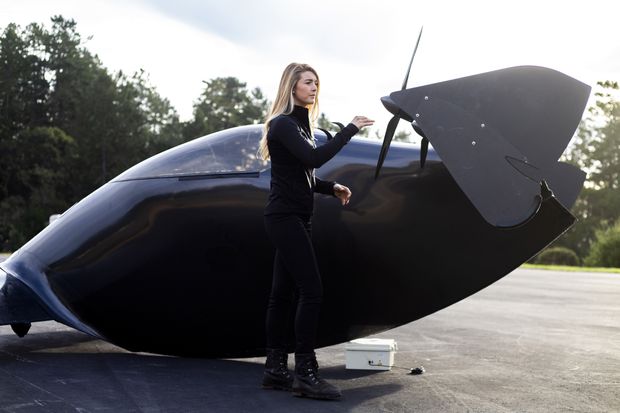 Photo by Nina Riggio – The Globe and Mail

The Globe and Mail’s Report on Business magazine published a list of entrepreneurs, academics and executives who are working towards finding solutions for the world’s problems. Kristina Menton(MechE 1T5) is featured on this impressive list of changemakers. Menton is currently the Director of Operations at Opener, a company that is developing an all electric personal vertical take off and landing aircraft. Read her profile from the Globe and Mail article below:

The story of Kristina Menton and Opener is one fit for a Hollywood blockbuster: While studying mechanical engineering at the University of Toronto in 2015, she was headhunted by a mysterious company in Silicon Valley. “I wasn’t even allowed to know the product before I signed the offer,” recalls Menton, who couldn’t resist the suspense. “I got the sense this was groundbreaking technology, but I couldn’t have imagined this.” Spoiler alert: Kristina Menton is building flying cars.

“It’s actually an electric personal vertical takeoff and landing aircraft,” she explains. “That’s not really a flying car because it’s not on a road, but for all intents and purposes, it’s a personal flying car.” When she tells people about her work, most think about a faraway future à la The Jetsons or Total Recall, but Menton’s very likely flying in the sky right now somewhere over California—she says she has “extraordinary privilege” to moonlight as a test pilot. The black-and-white-striped BlackFly looks part drone and part submarine, with eight propellers across wide wings. Already approved by the Federal Aviation Administration and Transport Canada, the BlackFly has thus far logged over 48,000 kilometres in the air.

When she’s not behind the wheel—which is actually more of a joystick and totally programmable to run autonomously—Menton is focusing on the design, testing and production of what could be the world’s most energy-efficient electric motor. It currently weighs in at two kilograms and generates 32 kilowatts, enough power to move the 225-kilogram BlackFly (and a single passenger) as much as 50 kilometres. While this distance can’t compare to an airplane’s range, imagine hopping into your flying car and soaring from one end of Toronto to the other with exactly no traffic.

But it’s one thing to make a single flying aircraft that works and another to mass-produce a product that reaches actual consumers. “Once we move into production, we’re going to have to learn to create aircraft that are accessible to regular people,” says Menton. So far, the BlackFly weighs half as much as its nearest competitor and doesn’t require a fancy pilot’s licence or any intense training. With any luck, the BlackFly could be yours for the price of a swanky SUV.

The real-world applications of the BlackFly are endlessly mind-blowing: among them, surveying, navigation, transportation, fire prevention, law enforcement and emergency response. Until then, the aircraft is being tested and retested daily. “We need to make sure everything is perfect, safe and reliable. There’s no margin of error here,” says Menton. Opener now hopes for a 2021 launch to the public, but until then, the thrill will be mostly hers. “To be an engineer and have this wild dream and then get in the air is just—just wow.”

Read the story in full and explore all of the changemakers in the Globe and Mail Report on Business article Changemakers: Canada faces serious challenges, but these leaders show that solutions are possible by Rosemary Counter and Katie Underwood