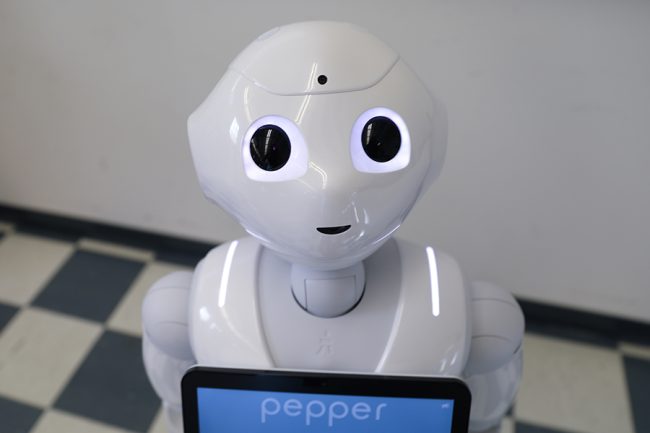 Pepper is a socially interactive robot used by a team in the Autonomous Systems and Biomechatronics Lab at U of T Engineering to study persuasion and authority in robot-human interactions. (Photo: Liz Do)

In the future, socially interactive robots could help seniors age in place or assist residents of long-term care facilities with their activities of daily living. But will people actually accept advice or instructions from a robot? A new study suggests that the answer hinges on how that robot behaves.

“When robots present themselves as human-like social agents, we tend to play along with that sense of humanity and treat them much like we would a person,” says Shane Saunderson (MIE PhD candidate), lead author of a new paper published in Science Robotics.

“But even simple tasks, like asking someone to take their medication, have a lot of social depth to them. If we want to put robots in those situations, we need to better understand the psychology of robot-human interactions.”

Saunderson says that even in the human world, there’s no magic bullet when it comes to persuasion. But one key concept is authority, which can be further divided into two types: formal authority and real authority.

“Formal authority comes from your role: if someone is your boss, your teacher or your parent, they have a certain amount of formal authority,” he says. “Real authority has to do with the control of decisions, often for entities such as financial rewards or punishments.”

To simulate these concepts, Saunderson set up an experiment where a humanoid robot named Pepper was used to help 32 volunteer test subjects complete a series of simple tasks, such as memorizing and recalling items in a sequence.

“Social robots are not commonplace today, and in North America at least, people lack both relationships and a sense of shared identity with robots,” he says. “It might be hard for them to come to see them as a legitimate authority.”

Another possibility is that people might disobey an authoritative robot because they feel threatened by it. Saunderson notes that the aversion to being persuaded by a robot acting authoritatively seemed to be particularly strong among male participants, who have been shown in previous studies to be more defiant to authority figures than females, and who may perceive an authoritative robot as a threat to their status or autonomy.

“A robot’s social behaviours are critical to acceptance, use and trust in this type of distributive technology, by society as a whole,” says Professor Goldie Nejat (MIE), Saunderson’s supervisor and the other co-author on the new paper.

Nejat holds the Canada Research Chair in Robots for Society, and is a member of U of T’s Robotics Institute. She and Saunderson conducted the work with support from AGE-WELL, a national network dedicated to the creation of technologies and services that benefit older adults and caregivers, as well as CIFAR.

“This ground-breaking research provides an understanding of how persuasive robots should be developed and deployed in everyday life, and how they should behave to help different demographics, including our vulnerable populations such as older adults,” she says.

Saunderson says that the big take-away for designers of social robots is to position them as collaborative and peer-oriented, rather than dominant and authoritative.

“Our research suggests that robots face additional barriers to successful persuasion than the ones that humans face,” he says. “If they are to take on these new roles in our society, their designers will have to be mindful of that and find ways to create positive experiences through their behaviour.”

– This story was originally published on the University of Toronto’s Faculty of Applied Science and Engineering News Site on September 22, 2021 by Tyler Irving