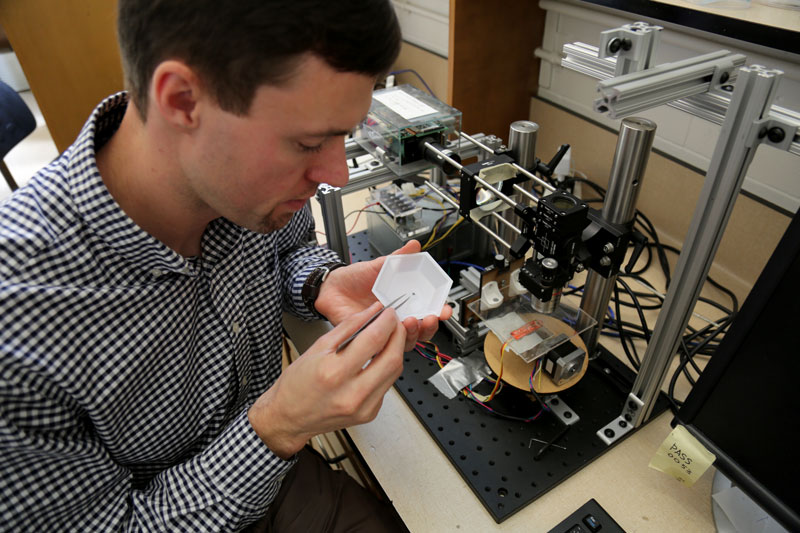 Leaders in the field of robotics are conducting groundbreaking research in the Department of Mechanical and Industrial Engineering (MIE) at the University of Toronto. Robotics is one of eight research areas at MIE and the department is home to cutting-edge researchers including professors Eric Diller and Xinyu Liu who are making waves in their respective subfields. Diller’s focus is on microrobots – some as small as a single cell – as alternatives to invasive medical procedures, and Liu has several projects on the go including the recent development of a highly stretchable robotic skin that can sense strain and humidity. Pam Walls spoke with Diller and Liu about their innovative work in more detail. 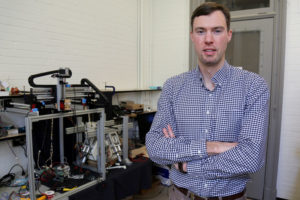 “I always liked machines and tinkering with hardware and things that I could touch with my hands and take apart,” says Diller, “So robotics was naturally appealing to me from a young age.” It really clicked for Diller during his undergraduate studies when he realized that the mathematical principles he had learned in high school and his first years of university enabled him to do new things like control the motion of a robot arm. That spark inspired Diller to pursue a career in the field of robotics, where he now specializes in the subfield of microrobotics.

Today, Diller develops tiny robots in his Microrobotics Laboratory that could one day be swallowed or injected into the body and then controlled wirelessly. Using a video game controller, Diller is able to manipulate the robot and drive it to a target area. Banks of precisely controlled magnets allow Diller to manipulate the robots remotely and rotate them in any direction. There are many possibilities for the mini robots such as taking biopsy samples using their tiny grippers or releasing drugs from their trap doors.

Diller works closely with collaborators at Sick Kids Hospital to develop his non-invasive medical devices. In partnership with neurosurgeon James Drake, Diller is also studying the capabilities of his microrobots to navigate the brain. “We’re working on wireless versions of microrobots that are inserted through a very small hole in the skull,” says Diller, “The robot would then be free floating inside the cavities of the brain where we could drive it to a tumor site and perform grasping and cutting right there.”

In addition to Diller’s research, he also teaches undergraduate and graduate courses. In his third year undergraduate course MIE 301, he demonstrates how students can mathematically analyze machine motion. The students are tasked with improving upon a real world product with moving parts – such as the landing gear of an airplane , a sofa bed mechanism or the transmission of a car – and then presenting their ideas to him as if he were their client or manager.

“It’s really rewarding to see students do the same thing I did,” says Diller. “They have taken all of these math courses and in my course, they see that they can use their calculus to study real world problems.” 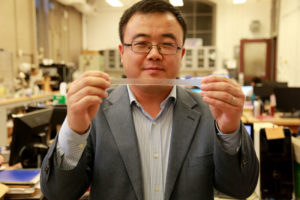 Small scale robotics is also one of the areas that interests Xinyu Liu. When he was working on his PhD at MIE under the supervision of Professor Yu Sun, he shifted away from more traditional, large scale robotics and turned his focus to the smaller scale. His thesis  centered on how to use robotic systems to manipulate micrometer-sized cells for biomedical studies.

After completing his PhD at MIE, Liu pursued a post-doctoral fellowship at Harvard University in the chemistry department, which further expanded his research interests. It was here that he was exposed to soft body robotics, machines that are inspired by creatures found in the natural world, such as octopi and inchworms. Applying design principles found in nature, Liu began to design his own soft body robots. “As an engineer,” says Liu, “I want to design interesting structures by learning from natural systems.”

Following his time at Harvard, Liu  joined the Department of Mechanical Engineering at McGill University before returning to MIE as an Associate Professor in 2017. Liu’s research group, the Microfluidics and BioMEMS Lab, has many projects on the go including micro-sized robots that respond to light, soft bodied robots that can climb walls and, most recently, a stretchable robotic skin with sensors that can detect touch, bending and ambient humidity. The robotic skin is a hydrogel material  made of double polymer networks with artificial ion junctions. The mechanical properties and sensory principles of the hydrogel are very close to those of human skin.

Many of Liu’s projects are exploratory and at the fundamental research level. “We propose new sensing and actuation mechanisms or system level designs to demonstrate novel capabilities,” says Liu.

The work done at Liu and Diller’s labs is part of a large, collaborative network of faculty members, students and industry partners in the robotics field. The recently launched Robotics Institute, headed by Sun, brings that community together.

“Many researchers at MIE are leaders in robotics,” says Liu. “I think the diversity and the strengths of our robotics researchers is definitely one of the most attractive features of our program.”