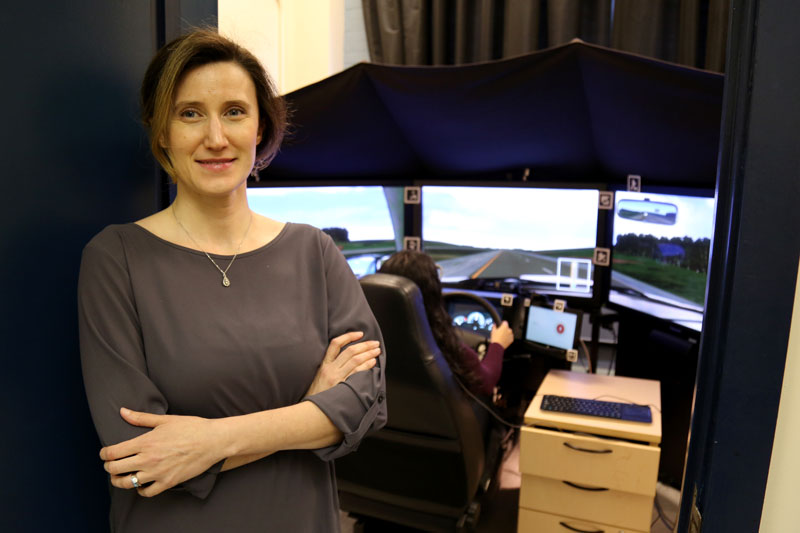 If you have dreams of reading a book or taking a nap while your self-driving car safely navigates city streets, you will have to wait awhile.

That’s according to Professor Birsen Donmez who works in the field of Human Factors, one of eight research areas at the University of Toronto’s Department of Mechanical and Industrial Engineering (MIE).

Human factors engineering is the study of human and technology integration. Donmez and her research group, the Human Factors & Applied Statistics Lab (HFASt), use a driving simulator to study different automated vehicle systems with the goal of making them as safe as possible.

Examples of automated systems currently available in the market include emergency braking if the vehicle detects a hazard in front of it and warnings if the car detects the driver has deviated from a lane or to warn of another car in the driver’s blind spot. Car companies are also testing higher levels of vehicle automation where the automation has lateral and longitudinal vehicle control, but the driver is still required to monitor the driving environment and be prepared to react if the system fails.

“You have to be careful with higher levels of automation,” says Donmez, “because you are removing manual control from the driver, but the systems are not always reliable. So, now the driver is expected to be the supervisor and the fall back person. However, it is very hard for humans to continuously monitor automation when they are not physically engaged in the control and it is also very hard to resume vehicle control when you only may have a few seconds to respond.”

While safe self-driving cars might not become commonplace in the near future, research is needed to identify how best to support the new driver tasks that come with higher levels of vehicle automation. Donmez and her team are looking at how technology can be used to help drivers safely multitask in a vehicle with automation.

For example, in the future, cars might be able to detect when drivers are not paying attention – perhaps because they are distracted by their GPS or phone – and provide a warning signal that makes them snap back into focus. Currently, Donmez and her team are testing various warning types to see what is most effective.

“If the vehicle can detect that the driver is generally attentive, then a warning about a potential hazard that requires them to resume vehicle control might not need to be too salient,” says Donmez. “But, if the system can anticipate that the driver might not be paying as much attention, the warning could be more salient.” In addition to the driving simulator in the HFASt lab, Donmez also uses an actual car to study existing technologies and infrastructure. Her team can monitor the driver navigating the streets of downtown Toronto.

“We study where people are looking, or failing to look, when they make turns at intersections because pedestrian and cyclist fatalities are a big issue,” she says.

According to a recent CBC News article, more than 1,100 pedestrians have been hit in Toronto this year; 31 of them were killed. Donmez says that her research on automated vehicle systems and interface design is just one piece of the puzzle and that safer and better designed cars and infrastructure are key components to making the roads less hazardous.

Donmez’s interests extend beyond automated vehicle research and into the healthcare sector. One of her other main projects is studying distractions and interruptions faced by healthcare personnel in operating rooms.

“We are doing collaborative research with St. Mike’s Hospital where they have a system called the Operating Room Black Box that records various types of data during surgeries,” says Donmez. Her team utilizes the data to investigate the effects of interruptions the surgical team experiences – such as people entering and exiting the room or distractions caused by equipment – on technical events.

Analyzing data is the subject of the graduate level course taught by Donmez at MIE. Students learn different methods of collecting data and how to analyze it. The goal is for both mechanical engineering and industrial engineering students to apply the skills they learn in the course to their own research.

“MIE has a longstanding history with human factors engineering,” says Donmez. “Some very prominent Human Factors people have been a part of the department.”

She notes that many Human Factors courses and options are offered at MIE at the undergraduate level, something not offered by many universities. She credits this to the large number of qualified faculty members who can teach a Human Factors related class.

“Human factors is a very broad field that requires quite a bit of breadth, and depth, of knowledge,” says Donmez. “Engineers solve societal problems, but I especially enjoy human factors engineering because you can see an immediate relation to the human, and society.”