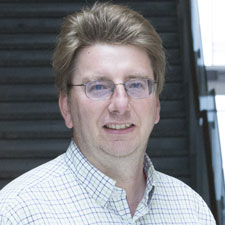 Professor Pierre Sullivan’s research interests span flow phenomena, energy conservation and micro-scale electrohydrodynamics. His work has examined novel physical insight into the area of micro-scale jets and electrowetting on dielectric droplet motion. In aerodynamic control, was initiated with acoustic control leading to the current work installing synthetic jets directly onto the wing. This work is focused on low-speed (1-5 kW) wind turbines and micro-air vehicles. This work has included difficult near-wall measurements, flow visualization and careful analysis to describe the actions of the two control mechanisms.

Most interestingly, his group has found a dependence on Reynolds number that allowed the identification of fundamental frequencies important to the shear layer vortices. This improves control schemes for the devices. In addition to this, through a number of collaborations he has embarked on an experimental and numerical study of bileaflet mechanical heart valves. He has developed a unique well-validated particle image velocimetry dataset that is much larger than any previously available and has made this available as an open dataset. This work has recently been modeled with Large Eddy Simulation to fully characterize difficult to measure turbulent stresses and statistics.