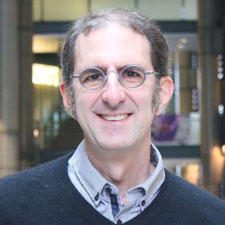 Professor Steinman completed his doctoral studies in Computational Hemodynamics at the University of Toronto in 1993. From 1993-1996 he did postdoctoral work in Magnetic Resonance Imaging at the Robarts Research Institute in London, Ontario, after which he became a Robarts Scientist and Assistant then Associate Professor of Medical Biophysics and Diagnostic Radiology & Nuclear Medicine at the University of Western Ontario. In 2005 he returned to the University of Toronto, where he is currently a Professor in the Department of Mechanical & Industrial Engineering and the Institute of Biomedical Engineering.

Professor Steinman is recognized as a pioneer in the integration of medical imaging and computational modelling, and their use in the study of cardiovascular disease development, diagnosis and treatment. His current research focuses on improving rupture risk prediction for cerebral aneurysms; elucidating the nature of turbulence in blood flow; developing an interactive ultrasound training simulator; and developing ‘art-inspired’ flow visualization and sonification techniques. He has authored more than 200 peer-reviewed journal articles and conference papers, and is the co-founder of the widely-used Vascular Modelling ToolKit. He was previously an Associate Editor for ASME’s Journal of Biomechanical Engineering, and is currently on the review boards of several international journals, as well as Associate Editor for BMES’s Cardiovascular Engineering & Technology. He was Chair of the Fluids Committee for ASME’s Bioengineering Division, and in 2012 was elected Fellow of the ASME. Professor Steinman has also been the recipient of New, Mid-Career, and Career Investigator salary awards from the Heart & Stroke Foundation of Canada.