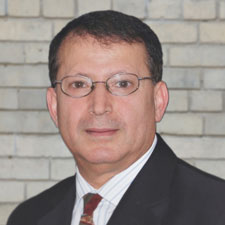 Professor Shaker Meguid obtained his PhD in Applied Mechanics from UMIST, England. He taught different branches of Applied Mechanics in 4 continents, including Oxford University, Cranfield University (England), University of Toronto, Cairo University (Egypt) and Nanyang Technological University (NTU-Singapore). His research activities have contributed significantly to the areas of nanoengineering, computational mechanics, advanced and smart composites, fracture mechanics and failure prevention. He has published over 400 papers in leading tier-1 scientific journals and international conferences and symposia including the most recently the 4th International Conference on Integrity, Reliability and Failure in June 2013. He not only organised but also contributed to numerous symposia as keynote and plenary speaker. He is the founding Editor-in-Chief of the International Journal of Mechanics and Materials in Design, Guest Editor to a number of Journals, Former Technical Associate Editor, for two consecutive terms, of ASME Journal of Engineering Materials and Technology, and a member of the editorial board of numerous journals. He is also the Editor of six international conference proceedings and author of two textbooks. Professor Meguid is the founding head of the Aerospace Division of NTU, Singapore. He holds the titles of Distinguished Visiting Professor in Tongji University (China), Porto University (Portugal), external examiner to Dublin Institute of Technology (Ireland), University of Putra Malaysia (Malaysia), and an Engineering Consultant to the United Nations. He is a lifetime member of AIAA, member of the American Academy of Mechanics, Professional Engineer in the Province of Ontario (P.Eng.), Chartered Engineer in Great Britain (CEng), Fellow of the American Society of Mechanical Engineers (ASME), and Fellow of IMechE. He works closely with the aerospace and automotive industries and is regularly approached by members of the media for clarification of engineering issues. Professor Meguid and his students have won many awards including the recent innovation award in nanoengineering by ASME. Professor Meguid is currently hosted by Peking University as Globex Fellow to teach Mechanics of Solids under the Global Exchange Program.