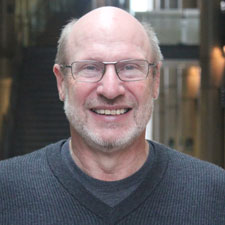 Application of Ontologies and Constraint-Directed Reasoning to the modelling, analysis and operation of urban systems.

Dr. Fox received his BSc in Computer Science from the University of Toronto in 1975, and his PhD in Computer Science from Carnegie Mellon University in 1983. In 1979 he was a founding member of the Robotics Institute of Carnegie Mellon University as well as the founding Director of the Intelligent Systems Laboratory within the Institute. He co-founded Carnegie Group Inc. in 1984, a software company that specialized in Artificial Intelligence-based systems for solving engineering, manufacturing, and telecommunications problems, and was its Vice-President of Engineering and President/CEO. Carnegie Mellon University appointed him Associate Professor of Computer Science and Robotics in 1987 (with tenure in 1991). In 1988 he was the founding Director of the Center for Integrated Manufacturing Decision Systems at Carnegie Mellon. In 1991, Dr. Fox returned to the University of Toronto where he was appointed the NSERC Research Chairholder in Enterprise Integration, and Professor of Industrial Engineering and Computer Science. In 1992, he was appointed Director of the Collaborative Program in Integrated Manufacturing. In 1993, Dr. Fox co-founded and was CEO Novator Systems Ltd., a pioneer in E-Retail software and services. From 1994-98 is represented Canada on the Intelligent Manufacturing Systems Global Program Scientific Committee. In 2013 he was appointed a Senior Fellow of the Global Cities Institute at the University of Toronto, and an Academic Advisor to the iCity Lab, Singapore Management University.
In 2014, he was the founding director of the Centre for Social Services Engineering in the Faculty of Applied Sciences and Engineering who goal is to apply engineering principles to the design and delivery of social services to the vulnerable in our society.In 2015 he was named a University of Toronto Distinguished Professor of Urban Systems Engineering.

Dr. Fox’s early research pioneered the application of Organization Theory to the design of distributed systems, contributing to the formation of multi-agent systems and Coordination Theory. His scheduling research resulted in the creation of the field of Constraint-Directed Scheduling within Artificial Intelligence, and several commercially successful scheduling systems and companies. He also pioneered the application of Artificial Intelligence to project management, simulation, and engineering design. He was the designer of one of the first commercial industrial applications of expert systems: PDS/GENAID, a steam turbine and generator diagnostic system for Westinghouse, which was a recipient of the IR100 in 1985 and is still in commercial use today at Siemens, monitoring over 1000 turbines and generators worldwide. He was the co-creator of the Knowledge Representation SRL from which Knowledge Craft™, a commercial knowledge engineering tool, was derived, and KBS, from which several commercial knowledge-based simulation tools, including Simulation Craft™, were derived. He co-developed the primary methodology used globally for designing ontologies based on Competency Questions. He led the well-known TOVE project that developed ontologies for modelling the structure, resources and behaviour of enterprises. His current research focuses on the ontologies and common-sense reasoning, and their application to Smart Cities. He has developed ontologies for the representation of city information and knowledge that are being adopted by cities around the world.

Dr. Fox was elected a Fellow of Association for the Advancement of Artificial Intelligence (AAAI) in 1991, a Joint Fellow of the Canadian Institute for Advanced Research and PRECARN in 1992, a Fellow of the Engineering Institute of Canada in 2009, and a recipient of the CP Rail Medal in 2011. He is a past AAAI councillor, and co-founder of the AAAI Special Interest Group in AI in Manufacturing. Dr. Fox has published over 200 papers.