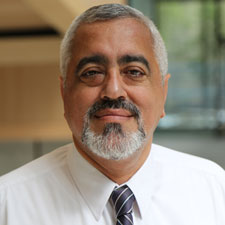 Dr. Kamran Behdinan, earned his Ph.D in Mechanical Engineering from the University of Victoria in British Columbia in 1996, and has a considerable experience in both academic and industrial settings. Kamran was appointed to the academic staff of Ryerson University in 1998, tenured and promoted to the level of associate professor in 2002 and subsequently to the level of Professor in 2007 and served as the director of the aerospace engineering program (02-03), and the founding Chair of the newly established Department of Aerospace Engineering (07/2003 – 07/2011).  Kamran was a founding member and the Executive Director of the Ryerson Institute for Aerospace Design and Innovation (2003-2011). He was also a founding member and the coordinator of the Canadian-European Graduate Student Exchange Program in Aerospace Engineering at Ryerson University. Dr. Behdinan held the NSERC Design Chair in “Engineering Design and Innovation”, 2010-2012, sponsored by Bombardier Aerospace and Pratt and Whitney Canada. Dr. Behdinan joined the Department of Mechanical and Industrial Engineering, University of Toronto, in the rank of Full Professor in September 2011. He is the NSERC Design Chair in “Multidisciplinary Design and Innovation – UT IMDI”, sponsored by NSERC, University of Toronto, and thirteen companies including Bombardier Aerospace, Pratt and Whitney Canada, United Technology Aerospace Systems, Magna International, Honeywell, SPP Canada Aircraft, Ford, and DRDC Toronto. He is the founding director of the “University of Toronto Institute for Multidisciplinary Design and Innovation”, an industry-centred project-based learning institute in partnership with major aerospace and automotive companies.

Dr. Behdinan is the past President of the Canadian Society of Mechanical Engineering (CSME), served as a member of the technical and scholarship committees of the High Performance Computing Virtual Laboratory (HPCVL) and a member of the Design Division of the Canadian Aeronautics and Space Institute (CASI). He is the founding director and principal investigator of the University of Toronto, Department of Mechanical and Industrial Engineering “Advanced Research Laboratory for Multifunctional Lightweight Structures”, funded by the Canadian Foundation for Innovation (Leader’s Opportunity Fund) and Ontario Research Fund. His research interests include Design and Development of Light-Weight Structures for aerospace, automotive, and nuclear applications, Multidisciplinary Design Optimization of Aerospace and Automotive systems, Multi-scale Simulation of Nano-structured Materials and Composites. He has supervised 28 PhDs, 110 Masters’, and 34 Post-Doctoral Fellows and Scholars. He has also published more than 330 peer-reviewed Journal and Conference papers, and 9 book chapters. He has been the recipient of many prestigious awards and recognitions such as the Research Fellow of Pratt and Whitney Canada and Fellows of the CSME, ASME, the Canadian Academy of Engineering, EIC, AAAS, as well as Associate Fellow of AIAA.