*ONLINE*
February 26, 2021
Interested members of the U of T community who would like to attend the online seminars can email Kendra Hunter at hunter@mie.utoronto.ca for the Zoom link. 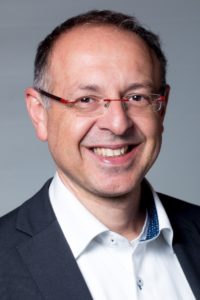 Abstract
Artificial Intelligence (AI) has become the buzzword of the last decade. Advances so far have been largely technical with a focus on machine learning (ML). Only recently have we begun seeing a shift towards focusing on the human aspects of artificial intelligence, centered on the narrow view of making AI interactive and explainable. In this talk I suggest a definition for “Interactive Human Centered Artificial Intelligence” and outline the required properties. Staying in control is essential for humans to feel safe and have self-determination. Hence, we need to find ways for humans to understand AI based systems and means to allow human control and oversight. In our work, we argue that levels of abstractions and granularity of control are a general solution to this. Furthermore, it is essential that we make explicit why we want AI and what are the goals of AI research and development. We need to state the properties that we expect of future intelligent systems and who will benefit from a system or service. For me, AI and ML are very much comparable to raw materials (like stone, iron, or bronze). Historical periods are named after these materials as they fundamentally changed what humans can build and what tools humans can engineer. Hence, I argue that in the AI age we need to shift the focus from the material (e.g. the AI algorithms, as there will be plenty of material) towards the tools and infrastructures that are enabled which are beneficial to humans. It is apparent that AI will allow the automation of mental routine tasks and that it will extend our ability to perceive the world and foresee events. For me, the central question is how to create these tools for amplifying the human mind without compromising human values.

Bio
Albrecht Schmidt is professor for Human-Centered Ubiquitous Media in the computer science department of the Ludwig-Maximilians-Universität München in Germany. He studied computer science in Ulm and Manchester and received a PhD from Lancaster University, UK, in 2003. He held several prior academic positions at different universities, including Stuttgart, Cambridge, Duisburg-Essen, and Bonn and also worked as a researcher at the Fraunhofer Institute for Intelligent Analysis and Information Systems (IAIS) and at Microsoft Research in Cambridge. In his research, he investigates the inherent complexity of human-computer interaction in ubiquitous computing environments, particularly in view of increasing computer intelligence and system autonomy. Albrecht has actively contributed to the scientific discourse in human-computer interaction through the development, deployment, and study of functional prototypes of interactive systems and interface technologies in different real world domains. His early experimental work addressed the use of diverse sensors to recognize situations and interactions, influencing our understanding of context-awareness and situated computing. He proposed the concept of implicit human-computer interaction. Over the years, he worked on automotive user interfaces, tangible interaction, interactive public display systems, interaction with large high-resolution screens, and physiological interfaces. Most recently, he focuses on how information technology can provide cognitive and perceptual support to amplify the human mind. To investigate this further, he received in 2016 a ERC grant. Albrecht has co-chaired several SIGCHI conferences; he is in the editorial board of ACM TOCHI, edits a forum in ACM interactions, a column of human augmentation in IEEE Pervasive, and formerly edited a column on interaction technologies in IEEE Computer. The ACM conferences on tangible and embedded interaction in 2007 and on automotive user interfaces in 2010 were co-founded by him. In 2018 Albrecht was induced into the ACM SIGCH Academy.

MIE’s Distinguished Seminar Series features top international researchers and leading experts across major areas of Mechanical Engineering and Industrial Engineering. The speakers present about their latest research and offer their perspectives on the current state of their field. The seminars are part of the program requirements for MIE Master of Applied Science and PhD students. The Distinguished Seminar Series is coordinated for 2020-2021 by Associate Professor Tobin Filleter.